How Long Does Cocaine Stay in Your System?

Cocaine is a stimulant drug that speeds up the body’s systems. It directly affects the brain’s dopamine system by blocking dopamine from getting recycled. That way, it gives the brain more dopamine to work with.

Yeyo, coke, snow, powder, or blow—it’s all cocaine. It’s the drug of choice for many employees because it doesn’t stay in the system too long for some tests. But how long does cocaine stay in your system? While there is no definite answer, this drug can stick around for a couple of days up until a few years. The Substance Abuse and Mental Health Services Administration (SAMHSA) found that 8.6% of full-time workers used cocaine in the month prior to their survey.

Cocaine may be a drug of choice for employees because it makes them feel awake and energized. Plus, it’s less likely to show up on drug tests in comparison to others that can stay in the system for months at a time. This may be why over a million Americans use it. One use can lead to addiction since coke is highly addictive, so it’s important to get treatment before it turns into regular use.

On the other hand, many employers have a drug-free policy. The Drug-Free Workplace Act requires the bulk of federal contractors and grantees to get tested for drugs. Though, private companies may enforce the requirements of a drug-free workplace as well.

An employer or addiction treatment center in West Virginia may conduct a cocaine drug test via samples of:

Employees may be tested before a job to see if they’re actively using it. It’s likely a job will randomly drug test their employees to make sure they aren’t consuming any drugs. Also, they may run a test to make sure an employee isn’t drinking on the job. Insurance providers, emergency rooms, and more may need to test a person’s coke use.

A cocaine drug test typically tests for metabolites aka the waste produced after the body filters it. So, toxicology tests might test for traces of cocaine and the waste that comes from using it. Addiction treatment centers will use it after a detox protocol to make sure that any traces of cocaine and its toxins are completely out of the body usually before treatment. 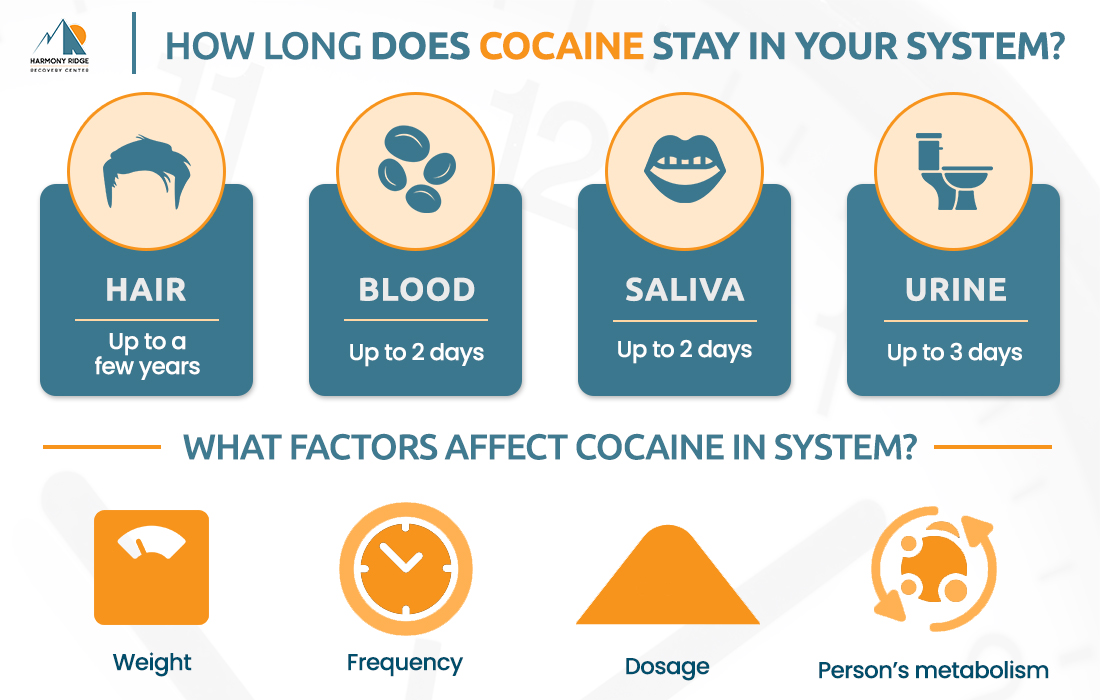 How Long Does Cocaine Stay in Your System: Hair

Cocaine can show up in a hair test for years. Typically, it will show up for a few months to a few years. Employers may not choose to use this drug test because of how long ago a person consumed cocaine while other companies might do so.

Drugs are absorbed into the bloodstream. Hair grows because it’s fed by blood vessels. So, traces of cocaine can be found in hair follicles years after someone consumes it. This makes it harder to cheat and makes the results more accurate.

How Long Does Cocaine Stay in Your System: Blood

Unlike hair, traces of cocaine stay in the blood for up to two days. Why would an employer choose a blood drug test over a hair drug test, then? It’s because it will show if an employee has just used cocaine. Plus, the results for a blood test come back immediately.

Of course, blood tests are invasive and can be painful. But results show up quicker than another kind of cocaine drug test. It may be more important for some companies to see if their employees are using coke while they’re employed versus if they used it years ago.

How Long Does Cocaine Stay in Your System: Urine

Cocaine can show up in a urine test for as long as three days. But, a heavy user may get a positive test result for up to two weeks. Employers may choose to use a urine test because it’s not invasive like a blood test; no prickly needles are involved.

However, it can be easy to cheat when going through a urine test. There are urine detoxes and the possibility to use another person’s urine. Often, tests are able to detect when a person tries to cheat a urine test. Another downside is it could take a couple of days to a week for results to process. This is longer in comparison to a blood test. Though, there are less accurate rapid results.

How Long Does Cocaine Stay in Your System: Saliva

A positive cocaine screen for saliva could happen up to two days from a person’s last dose. A saliva drug test can test for multiple metabolites but usually tests for two. These two are called benzoylecgonine and ecgonine methyl ester.

Cocaine saliva screening uses a tube to collect a sample. A company may choose to use a saliva test because it’s tougher to cheat than another. A tester may watch a person as their sample is collected. It’s more invasive to ask that of a person when a company needs a urine sample.

What Factors Make Cocaine Stay in Your System Longer?

For certain tests, the possibility of a true positive result disappears in a short window of time. Certain factors may extend that window. Some factors may increase the amount of time cocaine stays in a person’s system. This is especially important for people suffering from a substance use disorder.

Some of these factors can’t be changed. On the other hand, some can change, possibly speeding up the length of a detox and recovery time as a result. Factors that can affect how long cocaine stays in a person’s system include:

Coke has a half-life of approximately one hour, which means it’s out of the bloodstream typically in one and a half to two hours. Though its waste will stick around. Chronic cocaine abuse can extend this period of time. During detox, it would be a good idea to engage in activities that boost the metabolism that also help a person lose weight.

When a person enters an addiction treatment program, they can’t control how long they used cocaine before that time. It already happened. But, making an active decision to eat right and exercise can make detox less uncomfortable. Here at Harmony Ridge, we work to make the recovery process achievable and accessible for those in treatment.

How Long Does Coke Last?

Those who use cocaine may consume it in the following ways:

Oral ingestion makes coke last the longest. It also takes the longest to feel the effect this way. Smoking and injecting cocaine can take around 5 to 10 seconds to feel anything. Snorting it can take up to five minutes to feel its effects.

How to Get Cocaine Out of Your System

Addiction treatment centers in West Virginia use detoxification (detox) programs to get cocaine out of the system. A proper detox removes any traces, waste, or build-up of toxins from the body.

Since cocaine has a short half-life, it should mean a short, easy detox—right? Cocaine is highly addictive, which means it can lead to a longer detox. Also, it can make withdrawal symptoms worse, particularly in those who have a severe addiction.

There are three detox phases for individuals with a cocaine addiction:

1. Crash phase – It often happens a few hours to a few days after the last dose. Withdrawal symptoms appear around this time. The bulk of them will be physical withdrawal symptoms, which can be very dangerous without medical supervision. However, recovering addicts tend to have low energy and mood levels.

2. Cravings phase – This is also called the “withdrawal phase.” Individuals in this phase might start to feel intense psychological withdrawal symptoms. They might have serious cravings that appear not only as thoughts but also as vivid nightmares. This phase can last up to ten weeks.

3. Extinction phase – This phase happens after ten weeks but can last up to 30 weeks after the last dose. A victim of cocaine abuse may have random symptoms during this time. Treatment can help lessen the severity of symptoms.

Each person has a different detox timeline. A medical team at an addiction treatment center may use medicine to help with some of the symptoms during and after detox. A recovering addict with a mental illness may use medication to ease symptoms related to it.

Harmony Ridge can show you how to get cocaine out of your system safely. Trying to overcome a cocaine addiction alone is possible, but very unlikely. Plus, withdrawal symptoms can be dangerous.

If you are looking up “How long does cocaine stay in your system,” or you need to pass a drug test for work or insurance, let us help. It may be time to look into addiction treatment in West Virginia. Don’t let a cocaine addiction get in the way of your true potential. Contact us now.

The first step toward achieving recovery is to reach out to one of the rehabs in WV that can get you on the track to recovery. Our admissions team is available 24 hours a day, 7 days a week, 365 days a year. Give us a call today!